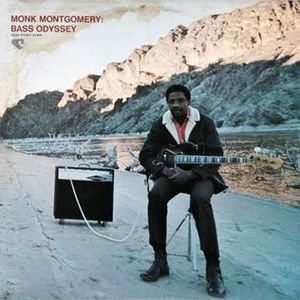 Released in 1971, Monk Montgomery’s second album as leader took him in new directions. On Bass Odyssey, the electric bass pioneer sat on top of the mix and came to the fore as both performer and composer. Joined by members of The Crusaders, the band created a fuzz-laden, groove heavy trip into the world of jazz psychedelia.

Journey To The Bottom is an appropriate title for a track with two bass players. Double bassist Andy Simpkins steadies the band from the bottom up while Montgomery takes the lead. The harmony is predominantly static although it briefly moves through a chord cycle which is emphasised by Montgomery’s melodic outlining. A riff-like melody is the focal point of this, and many of the compositions on the album. Montgomery’s solo becomes increasingly frantic as he utilises his pick to produce explosive flurries. Drama builds behind him which is essential when the solos are taken over one tonality. Due to the sound of the fender bass with flat wound strings, the use of double stops doesn't bring a great deal of colour to the sound. It brings a heaviness and a subtle rhythmic impact. Joe Sample’s electric piano solo uses motivic development and off-beat stabbing to keep the energy levels high.

Personage is a relaxed bossa nova with longer and more fluid lines from the leader. The piece is spacious as Montgomery is the only bass player and spends much of the performance playing the lead role. He draws a singing quality from his bass by sliding from position to position. His use of legato gives the Fender bass a melodic quality which is wasn’t associated with up to this point. The whole performance is a showcase for Montgomery’s lead playing. His solo lines are predominantly diatonic to the key although he does adopt chromaticism and uses the blues scale on moments of minor harmony. The band bring the piece to a close with a cross rhythm, playing powerful hits grouped in threes.

Montgomery plays a soulful melody over the descending chord sequence of Sister Lena. Beautiful in its simplicity, drummer Nesbert Hooper drives the groove along. He catches hits in the melody and fills musical breaks with gentle rolls around the toms. The beat itself is a simple soul rhythm where tasteful embellishment attracts the ear to the performance.

On Fuselage, Pt. 1, Montgomery uses a fuzz tone on the bass to play a four note melodic riff. The ensemble sit on a forceful minor groove that wouldn’t sound out of place on a Led Zeppelin album. The riff is broken up by a suspended chord which builds the tension before the release back into the main groove. Fuselage, Pt. 2 has a more experimental edge. A wall of distorted sound is created by the onslaught of frantic, fuzzed out bass exploration. Rather than being a frame for solo improvisation, the composition remains a rock-influenced infectious groove.

Foxy Gypsy opens with a solo bass cadenza over a backdrop of colourful percussion and spacious electric piano. Montgomery’s use of harmonic minor trilling evokes Eastern images. When the four chord minor groove begins, Montgomery takes an extended solo. He continues to use legato techniques as well as double stops and extended rhythmic development. Another cadenza concludes proceedings with the leader sliding emphatically up and down the neck.

Monk Montgomery continued to play more traditional forms of jazz and helped to encourage its performance through the Las Vegas Jazz Society. However, he was not afraid to experiment with his instrument, fusing jazz harmony with rock riffing, funk grooves and soulful melodies. Bass Odyssey was a large step forward for Montgomery as a unique but sadly overlooked voice on the bass guitar.