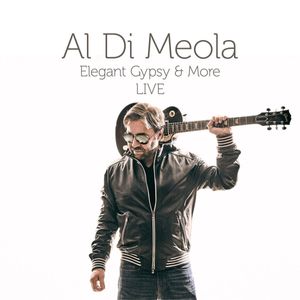 When the experiment of combining rock and jazz music originally took place, the two genres were placed in the test tube, given a stir and a violent explosion took place. One of the by-products of this controversial chemistry was the formation of harmonically advanced virtuoso guitarists who weren't afraid to stomp on the distortion pedal. Of course, there had been many technically outstanding guitarists before this point in jazz, rock, classical and other musical styles. But now the world had musicians pushing the limits of technical and harmonic capability while reaching a large audience with powerhouse riffing. One of these guitarists is Al Di Meola.

As time has moved on, jazz has fused with new styles such as hip-hop and electronica. However, it is hard to match the visceral excitement caused by a guitarist bending, tapping, sliding and infusing our DNA with electricity. Not many guitarists on the planet can do this like Al Di Meola.

The album kicks straight in with a driving rock riff, propelled along by the rolling snare drum. Di Meola winds fluid lines over the relaxed feel of the bass and piano. The band execute tight ensemble passages and instantly display their rhythmic confidence. Subtle details in the compositions really stand out in this live setting, such as call and response figures between the keyboard and guitar.

Señor Mouse begins with muted funk guitar dancing playfully over a rock solid drum rhythm. Two minutes in and the band have seamlessly stitched three genres of music together. The guitar and keyboard enter a musical dialogue that, combined with the Latin feel, evokes images of a heated but amiable coffee shop debate. As the debate reaches its climax, the two musicians steam off together, still as friends but with raised blood pressure.

Di Meola plays a sentimental melody on Adour, flowered with hints of darkness in the piano counter lines. Switching between clean and distorted sounds, Di Meola builds his solos to frantic climaxes before letting them dissolve back into moments of reflection.

Babylon opens with atmospheric and evocative Eastern improvisations before breaking into an odd-time groove. There is increasing tension resulting from the busyness of the rhythm section. Things takes a light hearted turn when the bass takes a chordal break with the audience cheering along. The bass continues to use chords underneath Meola’s lightning fast picking and elegantly melodic legato phrases.

On Chiquilín De Bachín, Di Meola responds to percussive hits with a thinking time that would impress a fighter pilot. The James Bond-esque chord sequence proceeds to take on a heroic metalicism that would make a rousing superhero soundtrack.

Up to this point, each composition has contained unfathomable amounts of composed material, so it’s all the more relaxing when the band sit on a groove. Flight Over Rio is played half time by the drums until it is doubled up for the bright, restless melody line. Such is the unbridled joy of the technical virtuosity on show, we can even forgive the short Careless Whisper quote. There is a chance for the percussion to shine in a short break but frankly, the performance of the rhythm section is astounding through the album.

Led Zeppelin’s Black Dog is given a brief outing with the vocal lines taken by the violin. However, it is often Di Meola’s guitar that uses manipulated notes to produce a singing quality. The use of extreme dynamics are a big part of the ensemble sound. Midnight Tango reduces to a whisper before landing a hammer blow to the head with an unexpected ensemble hit.

The album concludes with the devastating riffage of Race With Devil On Spanish Highway. Semiquavers scuttle over the massive sounding rhythm section like a shoal of fish toying with a blue whale.

Al Di Meola is a master of the guitar but he is much more than this. He is a sophisticated composer, an exciting performer and this album should not just be listened to by devoted students of the guitar. It is should be heard by anyone who wants to experience unbridled joy in audible form.