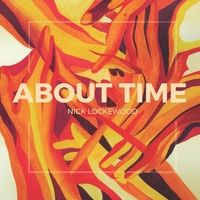 Recorded live in 2017, About Time is the debut album by bassist and composer Nick Lockewood. The recording is the culmination of his postgraduate studies at the Royal Northern College of Music in Manchester. This academic setting has allowed the composer to write for a large ensemble, a luxury which is often financially untenable in the jazz world.

Much of the material on the album incorporates folk music, predominantly from Latin America. The opening track Three’s a Crowd sets the tone of the album with a bubbling 12/8 rhythm. A repeated melodic guitar motif sits on a bed of warm, luscious string harmonies. The strings begin to weave a web around the leader’s bass harmonics. Building relentlessly, Lockewood breaks free of the web and launches into a melodically powerful bass solo, which is coloured with an occasional splash of non-diatonic harmony.

On Alô Alô / On Ice, the combination of bass harmonics floating over a sea of swaying percussion brings to mind Mark Egan’s band Elements. Beyond the introductory solo, Lockewood uses his bass as a percussion instrument, striking the strings and producing growling glissandos. This is a showcase for the band leader and he never sounds troubled by the 7/4 time signature.

John Coltrane’s seminal work Giant Steps is given the Cuban treatment. A 2-3 clave underpins a careful repositioning of the melody. There is a welcome break from the infamous harmonic density with modal vamps placed between solos in a manner similar to Brubeck’s In Your Own Sweet Way.

Armando Manzanero’s El Ciego opens with a solo bass introduction full of grand minor cadences, the kind Rubén González would improvise to set the mood of a bolero. The piano and guitar solos demonstrate great melodic maturity and are free of inappropriate technical excess.

A tense, driving pulse throbs under the dramatic open guitar chords of The Ballad of Oisin. Calm on the surface, the piece has the searing intensity of a boxer entering the ring. Lockewood takes a cinematic approach where the piece is one long crescendo. The bass solo brings the dynamic down and is injected with a dose of melancholy by the sharply refined string line.

Latin America makes its way to Africa on Lucky’s Strike. The bass led groove is reminiscent of the late South African low-ender Sipho Gumede. Although the piece is predominantly a joyous foray into major harmony, the strings perform a brief melancholy interlude which pulls at the hearts strings all the more because of the striking contrast. They are like a moment of grief in a children’s story. Percussionists Luigi De Gouviea, Jack McCarthy and Josh Savage get a chance to flex their well toned rhythmic muscles. Lockewood gets a final chance to demonstrate his finesse with chord melody on Pat Metheny’s Unity Village. His use of legato techniques helps the melody to sing.

In a jazz scene obsessed with harmonic progression and complexity, it is possible for the melody, and the joy of the music to become buried. Lockewood’s fusion of jazz and folk music harks back to the eighties but sounds current and timeless. His strong melodic sense allows the band to make the complicated sound simple. About Time may be placed in the jazz section of a record store but it is more than that and it’s potential to appeal to the wider public is undeniable.