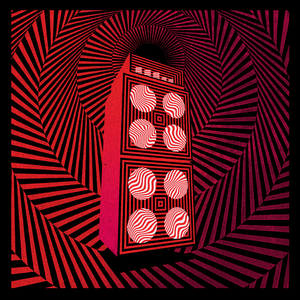 Opening with swirling, hypnotic synth sounds, Russian quartet Pressor put the listener in a trance-like state which is both nightmarish and fascinating. A full production allows the riffs to resonate through your core and stimulate the primordial senses. Many of the riffs on Weird Things are doubled by a synth sound which gives the music an apocalyptic ambience, immediately bringing to mind the work of doom metal monoliths Asva.

Although the execution of the riffs is tight and ruthless, they are always engulfed by atmospheric synth sounds. It is as though you are watching a well trained army march through dense fog. A heavy amount of reverb on the vocals allows them to become part of the thick soundscape. The initial bite of the vocals is percussive and aggressive but the reverb forms multiple layers of sound. The vocals sit back in the mix rather than being the primary focus of the compositions.

If you listen to it with rapt attention, you can easily be drawn in by the blankets of harmony. That is not to say that the pieces have extensive chord patterns. Rather that the multiple guitar tracks, along with the ambient sounds, create several dimensions of subtly changing harmonics. Each instrument moves like sediment in a huge, ancient mountain. Beautiful harmonies presented in a confrontational way have become a feature of doom metal through the work of Pelican, Red Sparowes and their contemporaries.

Not all of the tracks are performed at a glacial tempo. The title track still uses massive riffs but these are powered by a hardcore punk drum rhythm. Momentarily moving towards the sound of Scandinavian D-beat, Pressor maintain a sense of identity through their uncompromising use of atmospherics.

On the closing track Hexadecimal Unified Insanity the guitars play fast moving riffs while the synth stays on one note. It is a disorientating experience. This is augmented by guitar parts that creep out of the mix and then disappear as quickly as they arrived. On repeated listens it seems as though one guitar part becomes slightly out of tune. Rather than this being a negative, it gives the riff an added element of tension. It is not out of tune enough to be unpleasant, just enough to increase the menace on an almost subconscious level.