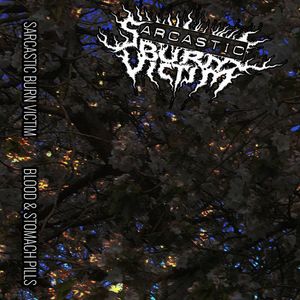 The outer fringes of the jazz and extreme metal worlds collided sometime ago. The freer side of the jazz genre is well documented where as improvisation in metal has remained a very small part of a hugely popular musical style. If grindcore is a subculture in its own right, then the more freely improvised noisecore is a subculture within a subculture. Pressings of recordings are often only done in double digits.

An influential collaboration between improvisers from both sides of the musical fence is the album Guts of a Virgin. Recorded in 1991, John Zorn and Bill Laswell joined with Mick Harris under the name Painkiller to produce a punishing slab of vinyl. The extremity also crept into the artwork, with copies being destroyed by customs agents in the UK under the obscene publications act.

A lineage can be traced from Painkiller to the work of Sarcastic Burn Victim, with many stops in-between. The sextet take elements of doom metal, black metal, grindcore, noisecore, harsh noise and free improvisation and deliver them with a sense of humour which also has a long tradition in noisecore. Subjects in the genre range from the leftist politics of Sore Throat to the controversial topics of the Meat Shits. In between there are bands such as Yes Means Yes and Stench of Death. The music of Sarcastic Burn Victim may sound evil to the uninitiated. However, their tongues are planted firmly in their cheeks with song titles such as Natural Born Testicle and We’re Eating Lieutenant Dropping’s Friends.

Zara Skumshot’s vocals vary between nasty black metal snarls and guttural death metal rumblings. When the vocals are unaccompanied, they take on a particularly devilish character. When placed over a wash of electronic noise, they sound like a radio transmission from Hell. If Khanate collaborated with Merzbow then they might sound nearly as demented as this.

The saxophone varies between the sound of guitar feedback and and that of a caged rat who is desperate for freedom. The frantic high register flurries instantly reminded me of the Music Improvisation Company and some of their more thematic improvisations. The saxophone is an instrument which is capable of great sonic variety. Compare the silky, vibrato heavy sound of Ben Webster with the work of Steve Lacy. The instrument does not sound at all out of place in a grind setting. Its paint stripping possibilities can be fully explored.

Everything on this recording is shrouded in a strangely absorbing fuzz. Imagine what it would be like to listen to a band while your head is inside a detuned television set. We can assume this is the work of noise makers Dr Age and Rupel.

The tracks are all relatively short, some being more akin to noisecore blasts with very little discernible riffage. While controversial vocalist Seth Putnam may have scoffed at the idea of his music being compared to free jazz, this record is a point scorer for those with an opposing opinion. The record is not just noise and free improvisation. Guitarist Jason Cineration is not afraid of a heavy riff to separate his spasmodic rants.

As the reader may have gathered, the names of the members are hidden behind darkly comedic alternate identities. A tradition dating back decades in the extreme metal scene.

Although jazz has been mentioned several times during this review, Sarcastic Burn Victim would be more likely to appear at the Obscene Extreme Festival than they would at your provincial jazz club. The combination of violent music with comedic themes is the aural equivalent of watching a Laurel and Hardy film where the set floor is covered in broken glass.