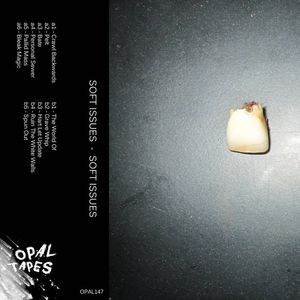 There has been a fresh wave of electronic experimentation in Yorkshire recently. Venues such as Wharf Chambers in Leeds, The Fulford Arms in York and The Trades Club in Hebden Bridge are diversifying their schedules with the outer limits of the improvised and contemporary music worlds.

Leeds based duo Soft Issues leave the listener in no doubt as to the nature of their intentions on this self-tiled cassette. Barely decipherable screams stun the listener, followed by an aggressive torrent of electronic noise. Violent pulses throb over tormented screams like electricity punishing every cell of a death row victim.

The  pulsations continue on Pelt. Static interjections come and go like a weak signal battling through bad weather. The underlying electronic blanket seems to increase in intensity bringing a sense of intense claustrophobia. On Bate, high pitched electronica and slowed down spoken word bookmark each end of the sonic spectrum. A tinnitus inducing frequency persists throughout.

Free flowing rhythms open Personal Sewer...more analogue than digital. Imagine children banging the lids of antique trash cans. This is followed by a wave of punishing noise which covers the middle and upper frequencies. Vocals are present but buried, trying to escape from beneath the layers of audible rubble.

Pallid Mass has the most repetitive rhythm so far. The pummelling signal is like a beast that refuses to stop visiting a disconcerted dreamer. Bleak Magic cuts through the ear drum like a futuristic chainsaw. The vocals generate distorted effects that appear and vanish at unpredictable intervals.

The first appearance of systemised tonality appears on The World Of with a 4 note minor melody creating a sombre mood. The vocals becomes less aggressive but all the more punishing. You can imagine somebody trapped in a office cubicle while pleasant background chatter penetrates their existence, making them all the more disturbed.

Short and sharp noisecore bullets fly out of the speakers on Grave Whip. The insistent beat of a bass drum gives Hart Let Update a danceable quality although it is far removed from anything you might hear on a city centre night out. The vocal delivery is more deliberate and is executed with a hardcore punk intensity.

Ruin The White Walls moves like a train rolling in to a station, reminding the listener of the noise of everyday existence. Many of the soundscapes presented by Soft Issues have an everyday quality but it is a daily routine which is oppressive in its overbearing insistence.

Soft Issue have created a fascinating aural picture of a digitally dominated world where people are becoming hypnotised by the repetitive nature of the ordinary.