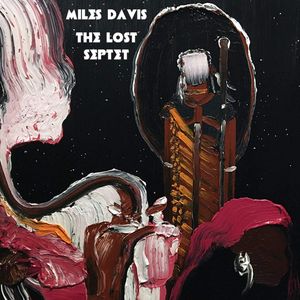 When writing about an album recorded in the latter part of Miles Davis’ career, it is difficult to avoid falling back on cliche’s about how he kept reinventing himself and incorporating current musical developments. That path has been well trodden and to stroll down it would seem lazy. Some degree of historical context can be useful when contextualising an album. However, an artist’s previous work can weigh on them like concrete shoes on a deep sea diver, puling them into the murky waters of comparison and disappointment.

The Lost Septet will undoubtably find its way into the jazz section of record stores and for that matter, the jazz section of this website. It does seem absurd that this album would be sitting in the same rack as an album by Kenny Ball. The two seem so far removed from each other. Although it almost defies classification entirely, it would seem more at home under the rock heading. It is rock music played by musicians well versed in jazz language and improvisational concepts.

To review the album on a track by track basis would seem to miss the point. The tracks are separated but flow into each other. They are smaller segments of a larger whole. Working from the ground up, drummer Leon Chancler and percussionists Charles Don Alias and James Mtume Foreman play relentlessly, serenely and hypnotically. They maintain conversational skills but their responses to musical questions are hidden in an outpouring of musical chatter.

Michael Henderson’s electric bass appears and disappears. When present, he dominates proceedings. He arrives like a strict father who has come to control the children. As he stands firm, the others run circles around him, playing dangerously while knowing he will protect them at all times. Laced with fuzz and wah-wah, Henderson plays grooves which in the absence of any obvious melodies, become the focal point of the compositions.

Keith Jarrett wasn’t always enamoured with the idea of playing an electric piano and he hasn’t returned to the instrument in recent years. He certainly sounds energised throughout this concert. His scuttling lines and dissonant voicings are one of the most striking features in this period of Miles Davis’ catalogue.

Few would argue that Miles Davis was one of the most melodically inspired soloists in recorded music. It is with some restraint that he plays from an entirely different perspective in this ensemble. His affected trumpet sound comes closer to the sound of Jimi Hendrix’s guitar than it does to any of the great horn players. His notes throb and pulsate as he bends in to sustained screams. During moments of quiet, there are traces of the Miles Davis of old. His more traditional tone is amplified with delay, allowing him to build his own harmonies.

It is easiest to hear the jazz DNA of the ensemble through saxophonist Gary Bartz. His solo lines are rooted firmly in the bebop tradition and they often build into upper register outbursts. He even appears to quote the standard I Let a Song Go Out Of My Heart at one point.

The whole performance has a futuristic feel. The band are exploring new musical worlds. It is hard to think of any ensembles that sound like the music presented here. Davis viewed his recordings as advertisements telling the listener to come and experience the band live. Unfortunately, the opportunity to do so has gone. Therefore we should be thankful that well recorded documents of Davis’ work are still being excavated, dusted off and presented to a new and open-minded audience.