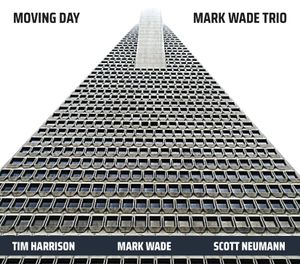 New York City has long been a magnet for the world’s most capable and creative improvising musicians. The embryonic stages of jazz may have taken place in New Orleans but the music quickly migrated North East as musicians looked to find work and escape persecution. In a city bursting at the seems with outstanding musical talent, performance levels are turbo charged by an atmosphere of creativity and friendly competition. Bassist Mark Wade has already placed himself firmly on the radar with his debut album Event Horizon. Now signed by Berlin based label Edition 46 Records, Moving Day may well move him towards international recognition.

The title track begins with the piano laying down the rhythmic groove of the piece while the double bass plays expressive melodic lines. Wade’s bass is recorded with a warm and full sound which allows the listener to see into the soul of the instrument. An incredibly capable technician on the bass, Wade’s playing covers the range of the instrument and he does not have to sacrifice tone while playing faster lines. Tim Harrison’s piano solo playfully skates over the 6/8 time signature and his lines display a heartfelt melodicism.

It is not easy to play complicated time signatures and make them seem natural. If the musicians are stressed, this translates to the listener. On Wide Open, the trio manipulate the changing rhythmic groupings with a commanding spirit. The performance has a forceful energy but you get the sense that the musicians are revelling in the complexity rather than clinging on for dear life.

Contrasting sections run through The Bells. Rhythmic energy is still there in abundance, but it is counterbalanced with rippling piano arpeggios and unobtrusive bowed double bass. What is so impressive about Wade’s soloing is that he avoids falling into a pit of double bass-isms. Throughout the album he solos with a horn-like agility.

Another Night In Tunisia is an arrangement of the Dizzy Gillespie standard where phrases are expanded and contracted. The initial listen is a disorienting experience as the original is so embedded in the collective jazz psyche. When the trio move into a hard driving 4/4 swing, there is a noticeable change from cerebral pleasure to a visceral one. It is a striking example of how much has changed in jazz, yet so much remains the same.  The harmonic and melodic material has remained fairly static for 60 years, yet the rhythmic aspect of the music has developed dramatically.

Autumn Leaves is recognisable, aside from a few subtle re-harmonisations. However, maybe ‘Autumn Voyage’ would be a more suitable title as Wade has cleverly used the chord sequence of Herbie Hancock’s modal piece Maiden Voyage in the bridge section of the arrangement. Harrison demonstrates a great level of subtlety in his solo. He uses winding enclosures and grace notes that allow the piano to sing.

There is a calming atmosphere throughout Midnight In The Cathedral which is tastefully tested by the pent up energy of Scott Neumann’s sizzling ride cymbal. Wade’s solo could be heard as a double time walking line in the upper register. If it is Midnight In The Cathedral then the bass solo is the energetic mouse, exploring every corner of the building while no one else is around.

Many contemporary jazz albums can lose a connection to the listening audience when the performers become too lost in their own musical ability. The Mark Wade Trio are musicians who command an advanced technical, harmonic and rhythmic capability but they keep the listener engaged through their musical maturity. This is particularly evident on the album’s closing composition In The Fading Rays Of Sunlight. There is still an abundance of instrumental virtuosity but it paints an interesting abstract picture, placed in a relatable harmonic frame.

The core strength of the Mark Wade Trio is their ability to dive deep in the sea of jazz history and salvage great treasures. Rather than presenting their findings as museum pieces, they rearrange and redecorate, giving the artefacts a relevance in the modern world.